A Wreath for Emmett Till 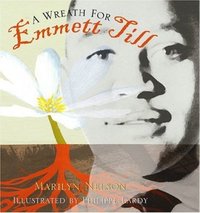 A Wreath for Emmett Till

Last summer a teacher friend and I went to the International Civil Rights Museum in Greensboro. We left feeling that we had learned a lot, and that we had a long way to go to achieve the world that the civil rights leaders of the 50’s and 60’s had envisioned.  We were warned before going into one of the rooms that there would be brutal images of lynchings.  The images were difficult to look at, and perhaps the most heartbreaking was one of Emmett Till, a fourteen year old boy who was accused of whistling at a white woman, was kidnapped out of uncle’s house, beaten, shot, and thrown in the river. After his body was found, his mother insisted that he have an open casket, so that everyone would see what had been done to him.
Marilyn Nelson has used a series of sonnets, called a heroic crown, to mourn Emmet Till.  In many ways it is a inspired choice –  the strictness of the  form allows the reader to at first stand back from the horror it portrays, and then feel a part of it. This is not something that many of my 8thgrade students could pick up and really understand, but for those who can, they have been given a masterpiece.  If I taught high school, this would be required reading in both English and History classes.
Posted by Paige Y. at 6:44 AM 1 comment: 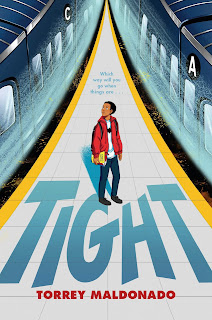 Bryan loves superhero comics and he loves to play arcade games – every time he plays Ms. Pac Man he gets the high score. He also lives with his family in a housing project in Brooklyn, and life isn’t always easy.  His dad is in and out of jail – he just can’t seem to control his temper enough to keep out of trouble.  When he’s home, he spends much of his time hanging out at the bodega and telling Bryan he can’t be soft.  But Bryan has never been one to get into trouble, even though he sometimes feel his temper rising, the same way it does for his dad.  He spends his time in his mother’s office at the community center, drawing and reading his comics.  Until one day when Mike comes by and both of Bryan’s parents encourage them to be friends. Mike seems cool at first – he too loves comics and drawing – but he also runs hot and cold.  And he starts encouraging Bryan to do increasingly dangerous things – skip school, run through the turnstiles at the subway without paying, and subway surfing.  Bryan hates doing these things, but he’s in over his head and he doesn’t know how he’s going to get out.
For the most part, I enjoyed Tight.  Bryan is Puerto Rican, but that doesn’t play heavily into the story.  I think the dilemmas Bryan faces are realistic for a kid his age (he’s in the sixth grade), as well are the emotions he deals with when his father goes back to jail.  My main issue with the book was the abrupt ending – I think that adding a few more pages would have left me feeling much more satisfied.
Posted by Paige Y. at 8:42 PM No comments: 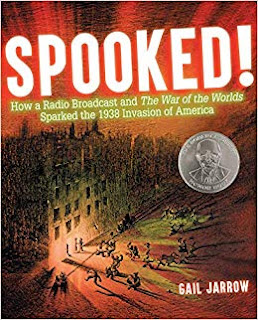 Spooked!  How a Radio Broadcast and The War of the Worlds Sparked the 1938 Invasion of America

Fake news.  We’ve all heard the term.  “News” that has been made up to deceive or scare the reader or listener.   Well on October 30, 1938, people across the nation were fooled into believing that the world was being invaded by Martians.  Silly? Maybe, but think about it:   if television and the internet didn’t exist and you got most of your entertainment and news by radio, imagine how you’d feel if the program you were listening to was interrupted by breaking news?  The broadcaster says strange cylinder have landed near Grovers Mill, New Jersey.  Suddenly these beings appear and start to kill everything in their path.  Earth is doomed – you can hear masses of people being murdered.  Would you panic?  Would you flee? And how would you feel once you found out it was just a radio play, based on a book by H.G. Wells?  And you’ve been fooled.  Badly.

I've known about Orson Welles' radio broadcast, but I confess that I had some misconceptions about it.  I had always been told that masses of people panicked and fed the area around Grovers Mills, but Jarrow argues that while many people may have been fooled and scared by the broadcast, there wasn't a mass panic and traffic jams all over the place.  I thought Jarrow did a great job of laying the background for the broadcast and talking about the repercussions.  This was a fun piece of nonfiction, and I look forward to recommending it to my students.
Posted by Paige Y. at 8:01 PM No comments: 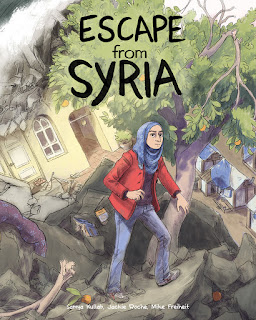 Amina is your normal young girl, about 10 years old when this book begins.  She lives in Aleppo, Syria with her mom, her dad and her brother.  She works hard in school and does well.  Everything is good until one day a bomb goes off.  Everything she knows changes immediately.  Although her family is fine, they are forced to flee the increased fighting in Syria as rebel soldiers fight the Assad Regime, and then ISIS joins in. Amina and her family end up in Lebanon but life isn’t good there either.  There is very little money, and when her little brother gets sick, the family has to go into debt to pay for his medicine.  Perhaps the only way out is to leave the Middle East altogether and go to Europe, or North America.  But being a refugee has its own dangers and Amina and her family are caught in the middle.

Escape from Syria is a great introduction to the tragedy of the Syrian civil war.  While Aminia is a fictionalized character, her story has happened to millions of people who have fled the war.  I thoroughly enjoyed this graphic novel.
Posted by Paige Y. at 2:07 PM No comments: 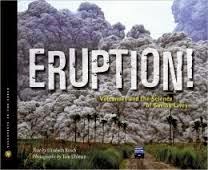 Eruption! Volcanoes and the Science of Saving Lives
Scientists in the Field series
Elizabeth Rusch
2013


Is it insane to live in the shadow of a volcano?  More than a billion people live within the reach of a volcanic eruption.  Most of the time the people are safe and volcanic ash from previous eruptions make the land perfect for farming.  But then there are times when the volcano becomes very, very deadly.

It is 1985.  The city of Amero, Columbia has more than 30,000 inhabitants, even though it sits in the valley beneath the volcano Nevado del Ruiz.  Then, on November 13, the volcano erupts.  Instantly tons of snow is melted, starting a mudslide that will envelop the city.  More than 23,000 people are killed.  Why, with all of the sophisticated equipment of the late 20th century was this allowed to happen?  Some scientists vow, “Never Again,” and the Volcano Disaster Assistance Program was formed.

Eruption tells the story of two subsequent volcanic eruptions – Mount Pinatubo in the Philippines and Mount Merapi in Indonesia – and how scientists are now able to predict when a volcano is about to erupt and then order evacuations that are both timely and life-saving.

I’ve only read a couple of books in the Scientist in the Field series but the ones I have read have been stellar examples of nonfiction writing.  Eruption was no exception – it was suspenseful and well-written and I learned much about volcanoes.  I highly recommend this addition.

Review copy came from my school library.
Posted by Paige Y. at 9:57 AM 1 comment: 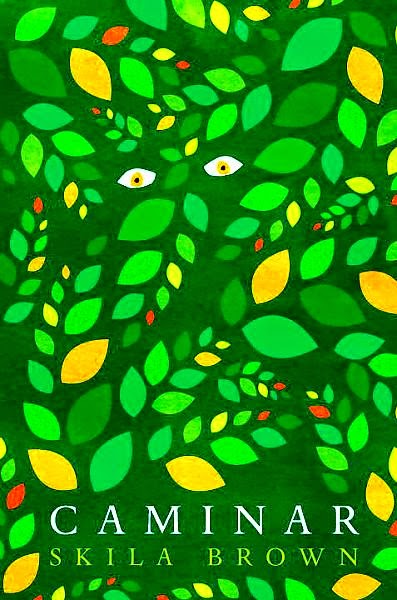 Carlos lives in a peaceful little village with Mama.  He cannot wait to be grown so that he can work and help her.  But while his village might be peaceful, the country isn’t and eventually soldiers come looking for rebels that are supposedly nearby.  The soldiers leave, but they assure everyone that they will deal harshly with anyone who helps the rebels.

One day when Carlos’ mama has seen him into the forest to gather mushrooms, he hears gunshot and he realizes that the soldiers have come back everyone in the village is being massacred.  Knowing he cannot go back to the village without being killed, Carlos decides to try and reach his grandmother’s village high up on the mountain so that he can warn the people there of the great danger they are in.

Caminar is a heart-breaking story of loss amid horrible violence.  Skila Brown has chosen to tell the story through verse, and I really like that decision.   This would be a great book to pair with Tree Girl by Ben Mikaelsen.
Posted by Paige Y. at 1:10 PM No comments:

Since You've Been Gone 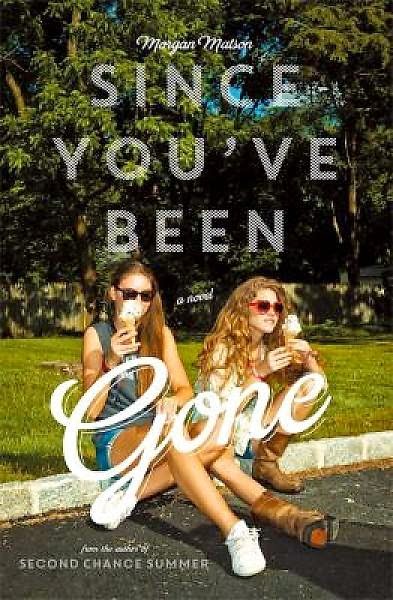 Since You've Been Gone
Morgan Marson
2014


Emily has always been the quiet, subdued half of the Emily and Sloane pair.  For two years, it’s pretty much been wherever you see one girl, you’ll find the other one.  Emily is looking forward to another fun summer with Sloane when one day Sloane and her family disappear.  Nobody is at the house, and Sloane doesn’t answer her phone or any of the texts Emily sends her.  There’s not really anyone who can help Emily.  Her parents are generally wonderful but they’re spending the summer writing a play and they are so engrossed in their work that they are oblivious to life around them.
When Emily receives a letter from Sloane, she eagerly opens it, hoping that it contains an explanation for her disappearance.  Instead, it has a list:
1.     Kiss a Stranger
2.     Go Skinny-Dipping
3.     Steal Something
4.     Break Something
5.     Penelope
6.     Ride a Dern Hors, Ya Cowpoke
7.     55 S. Ave. Ask for Mona
8.     The Backless Dress and Somewhere to Wear It.
9.     Dance Until Dawn
10. Share Some Secrets in the Dark.
11. Hug a Jamie
12. Apple Picking at Night
13. Sleep Under the Stars
Emily hopes that if she completes the list, she will be able to find Sloane. As she starts working her way through it, she realizes that the list was created in order to make her feel brave and to experience the world in a bold, new way.  While on her journey she makes some great new friends and discovers a lot about herself.


Morgan Matson has written 3 books and I’ve read and loved them all.  As in all of her books, there is a romantic element and even though it was obvious whom Emily was going to end up with, it didn’t matter and it wasn’t really the point of the book.  This was a book about stepping outside your comfort level and doing it without the most important person in your life.  I think it will resonate with many teenagers who will be clamoring to read it.
Posted by Paige Y. at 10:14 AM 1 comment:

Paige Y.
I'm a middle school librarian who adores her job. Email me at pysteboe@gmail.com