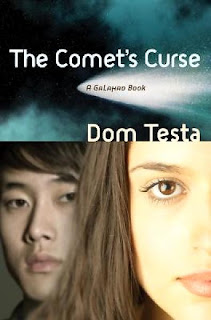 At first it was just an interesting spectacle – a comet coming close enough to Earth to be seen clearly, its tail passing through Earth’s atmosphere. But then, mysteriously, adults on Earth begin to sicken and die. It’s soon determined that the tail contained a mysterious virus, a virus that only affected adults but that was deadly. It looked as though all of mankind was doomed. But then a scientist decides that the way to save the human race was to send 251 teenagers off to another planet where they can start fresh. A world-wide search was started and the teenagers chosen. After teary goodbyes they leave Earth forever on a five-year trip to Eos and a new life. Unfortunately, there are those who are opposed to the entire mission and they are willing to do anything to stop it, even if it means killing everyone aboard.

This was a truly enjoyable read for me. I’ve been rewatching the original Star Trek episodes recently and The Comet’s Curse fit right in with that. Yes, there are some predictable plot points, but it didn’t matter to me. This book was exciting and had really likable characters. I appreciated the fact that the crew of the ship was multicultural but that wasn’t thrown in your face; instead it was seamlessly integrated into the story.

Like all good science fiction, The Comet’s Curse also gave me an interesting moral issue to ponder. Was it morally right for so many scientists to devote literally their last moments alive to saving just a few people instead of working on a cure (even though it had been pretty well accepted that a cure wasn’t likely)? I think I would feel that the existence of the human species would warrant such drastic action as sending teenagers off into space, but it would make for interesting discussion.

The Comet’s Curse is the first installment in a projected six-part series.

The copy that I used for this review was acquired from my school library.

Now THIS sounds right up my alley. Thanks so much for the review, Paige!

This is definitely my kind of book. I will be putting it on my must read list. Thanks for sharing.

Sounds terrific! I'm going to have to look for this one right away. Thanks for the review!

This is a really interesting premise, glad to hear it was an enjoyable read!

Wow, I hadn't heard about this one yet! The all-adults-are-dead/dying/gone idea has been done over and over, and yet I can't get enough!

Check this out...
http://www.youtube.com/watch?v=WDXVVt9iRgA
He's got a whole series, including one with book recommendations. Score!

This has gone on my TBR pile. This is something I can really get into.

I recently read Jen Robinson's review of this same title and regardless of what might be a few formulaic aspects, it sounds like fun! Thanks for another great review of the title--you and Jen have definitely convinced me to go look for it.

I saw Jen's glowing review and have it on reserve, but still had reservations. Thanks for another recommendation-- I'll definitely take a look. Also, thanks for The Kiss List suggestion-- I will see if I can find a copy!

Thanks for another great review of the title--you and Jen have definitely convinced me to go look for it.

Paige Y.
I'm a middle school librarian who adores her job. Email me at pysteboe@gmail.com